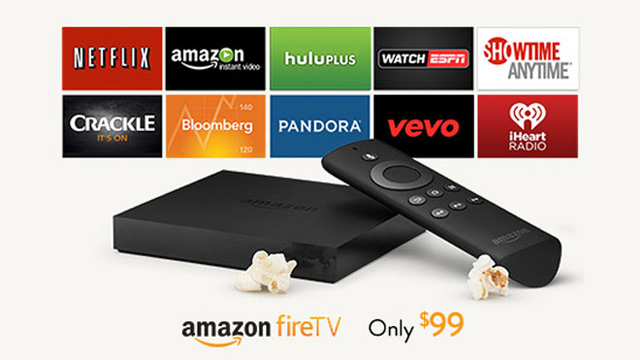 Amazon debuted Fire TV today at an event in New York City. It’s an announcement that had it been done yesterday it very well have been viewed as an April Fools’ joke. The Google Chromecast was a huge advancement in the whole “smart tv” movement and this is that on steroids.

The Fire TV is a set-top box that hooks up to your television to stream content from Amazon and its partners. Aside from the Chromecast, it compares best with Apple TV and the Roku 3. The technical specifications for the Amazon Fire TV are off the charts. The box features a quad-core processor and 2 gigabytes of memory. It has an ethernet port to connect to your home internet in a wired fashion and  Dual-band/Dual-antenna WIFI to connect sans wires. By comparison, the Apple TV and Chromecast both have single-core processors. The Roku 3 features a dual-core processor and all three feature 512 MB of memory.

Like the Roku 3, the Fire TV comes with a wireless remote. Amazon takes that to the next level as well with Voice Search. Just speak into the remote and search on the Fire TV. Amazon is touting ASAP (Advanced Streaming and Predicition), which will learn what you like and automatically get them ready for you to watch next.

Along with the Amazon library, the Fire TV launches with a host of other applications. Netflix and Hulu Plus are there as well as Pandora, Watch ESPN and iHeartRadio among a host of others. Fire TV does lack support for HBO GO, which the other three have. It counters with Showtime Anytime, which only the Roku 3 has.

The tech website Mashable has a comparison guide on the four products.

Amazon is also trying to take on game consoles with the Fire TV. For $40 you can buy a game controller to connect to the Fire TV which will greatly expand the number of games available. The website touts dozens of free games available with many more available for as little as 99 cents. Games mentioned are Deus Ex: The Fall, Asphalt 8, NBA 2K14, Sonic the Hedgehog and Tetris. The average price of the games is touted at $1.85. Amazon has also developed Sev Zero, an alien invasion game, which will come free to those purchasing a controller. The game controller can also act as a remote for other media on the device.

Amazon is also upping the game in the Second Screen movement with how Fire TV will interact with Kindles. You’ll be able to “fling” your screen from an enabled Kindle to your TV and get more information on whatever the Fire TV is playing with X-Ray, powered by IMDB.

The Fire TV became available today on the Amazon website with a price tag of $99. I bought mine today and paid the extra $3.99 for one-day shipping. It should be at my doorstep tomorrow.