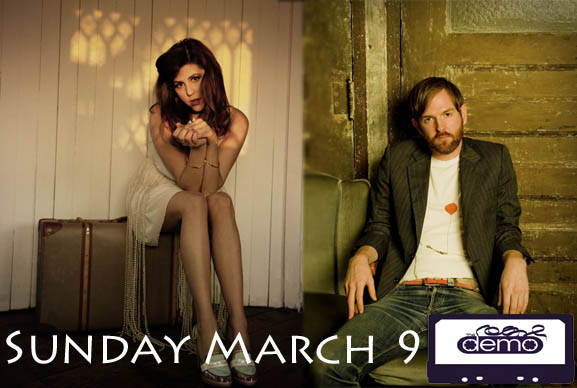 New York-based singer/songwriter Jillette Johnson returns to St. Louis on Sunday, March 9th, with a show at The Demo. She’ll be opening, along with local act Cannon Field, for Wakey!Wakey!. Tickets to the show in The Grove neighborhood are $12.

I wrote about Jillette back in July leading up to her show at The Firebird. She had just released her album in June and was on tour promoting it. CBS News praised her in November saying “when Jillette Johnson sings, you can’t help but to stand up and listen”. Jillette recently filmed a video for her song, “Torpedo” and performed it on VH1’s Big Morning Buzz Live and The Rachael Ray Show.

You can download Johnson’s debut album, Waiter In A Whale, for $7.99 on Amazon.com.

Wakey!Wakey! is fronted by Michael Grubbs, who played the role of Grubbs in a 10-epiode arc on One Tree Hill. The band has also performed several song on the show. Like Johnson, they are based out of New York; Brooklyn to be exact. Considering Grubbs lists Billy Joel and Elton John as two of his biggest musical influences, the night will feature a healthy dose of piano.

Wakey!Wakey! recently released “Irresistible” featuring Johnson, which you can download for free. They also released a lyric video.

You can listen to more music from Wakey!Wakey! on SoundCloud. “War Sweater” was the band’s first song to be featured on One Tree Hill. The band also released an EP of covers featuring their renditions of “Girls Just Want To Have Fun”, “Sex and Candy” and Justin Bieber’s “Boyfriend”. Hopefully they have a cover of Nelly’s “Hot In Here” ready for their St. Louis show. Maybe one like his 2010 touring partner Jenny Owen Youngs did?

Michael Grubbs recently recorded a video where he said he was excited to come to St. Louis as long as he stays away from breweries before the show. He did not mention whether he will try the Wakey Wakey at Stacked Burger Bar in Carondelet or not.

Local band Cannon Field will open the show. In a fun coincidence, the band opened for RealLifeSTL favorite Kim Singer at her EP release show back in September. Singer opened for Jillette Johnson when she came St. Louis town last August.

Tickets can be purchased online for $12 from The Demo. Doors will open at 7:30 pm with the show beginning at 8 pm.

Enjoy this Huzzaz video playlist featuring videos from the artists involved with this show.

This Weekend in St. Louis Ryan 922 days ago.

This Weekend in St. Louis Ryan 922 days ago.