For years tombstone tourists have been visiting the graves of celebrities to pay homage to their idols.  These tourists take photographs and chalkings of headstones in cities like New Orleans.  In Paris’ Père Lachaise Cemetery, visitors used to don bright red lipstick to leave a kiss print at Oscar Wilde’s tomb.  While the advisability of such a practice is debatable, the tourism itself celebrates local culture and mourns local celebrity.  Though the practice is uncommon in St. Louis, it’s certainly feasible.  St. Louis’ Bellefontaine Cemetery is the resting place of dozens of local celebrities with familiar names like Eads, Busch, and Danforth.  My focus today, though, is to celebrate local literati and their influences.

Arguably St. Louis’ most famous literary progeny, T.S. Eliot, drew inspiration from his hometown in his writing.  In his perennial secondary school classic, 1915’s “The Love Song of J. Alfred Prufrock,” Eliot borrows the surname of local businessmen William and Harry Prufrock, owners of a downtown St. Louis furniture store.  Eliot may have familiarized himself with the name while attending Smith Academy (now MICDS).  The school’s literary magazine, Record, for which Eliot wrote, featured ads for the furniture store.  Though you will not find Mr. Eliot himself there, the Prufrocks now rest at Bellefontaine not far from Eliot’s grandfather, William Greenleaf Eliot, co-founder and former chancellor of Washington University.  Check out a very cool illustrated version of the Prufrock poem here.

For the chef in us all, St. Louis is notable for more than our (delectable) provel specialties.  Native St. Louisan Irma Rombauer authored The Joy Of Cooking in 1936 after her husband’s death to support her family.  In fact, Rombauer was neither a trained writer nor a trained chef—she studied art at Washington University.  The first edition of Joy was far more modest the tome available today, but grew with the publications of new editions.  Rombauer’s family continues to edit and supplement new editions of the behemoth book which has now sold over 18 million copies, making it the bestselling cookbook of all time.  Joy owes at least some of its success to the rare inclusion of Rombauer’s voice in the book.  Rombauer added anecdotes to her recipes and listed the ingredients in the prose throughout, resulting in recipes that were not merely instructions, but dialogues between the reader and the author.  You can order the cookbook or check out some new recipes here. 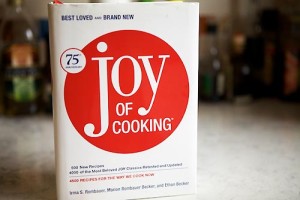 Pulitzer Prize-winning lyric poet, Sara Teasdale, was also born in St. Louis.  Teasdale was first published in St. Louis’ Reedy’s Mirror in 1907, and by 1918 had won a Pulitzer for Love Songs.  Teasdale’s influence cannot be ignored—her 1920 poem “There Will Come Soft Rains” influenced Ray Bradbury’s short story of the same name.  Teasdale died in New York City in 1933, but was brought back to St. Louis for her burial.  The entire text of Love Songs is available via Project Gutenberg, and you can also find “There Will Come Soft Rains” here.

William Burroughs was a local author whose talent transcended genre as he wrote novels, essays, and short stories, and even painted and performed live on stage.  Burroughs was a popular Beat Generation author who grew up in the Central West End and late rubbed elbows with the likes of Jack Kerouac and Allen Ginsberg.  Though he lived for some time as an expat, Burroughs always settled close to home, spending the end of his life in Lawrence, Kansas.  Burroughs’ postmodernist experiments climaxed with the publication of 1959’s Naked Lunch, a non-linear novel that landed among Time magazine’s best English-language novels.