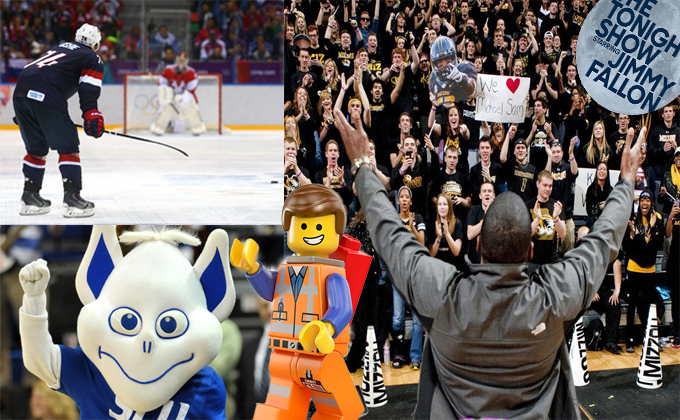 Saturday morning Team USA played Russia in the opening round of Men’s Ice Hockey in Sochi. Late in the third period, with the game tied at 2, Russia appeared to get the go-ahead goal. After video review, the goal was disallowed because the net was off its mooring by the  slightest margin. Regulation ended in a tie and the game was still tied after the overtime period, sending the game into a shootout. Whereas in the NHL the same player can’t shoot twice, international rules allow any player to shoot if the game is still tied after three rounds of the shootout. Team USA took full advantage of that by sending T.J. Oshie out for 6 of the 8 attempts. Oshie didn’t let America down. Despite early start, millions of Americans filled spots around the country to watch the game. Over 500,000 people were live-streaming the event.

One man in Oxford, Ohio reenacted the speech Kurt Russell, as Herb Brooks, gave Team USA in the 2004 film, Miracle. That film is of course based on the US victory over the Soviet Union in the 1980 “Miracle On Ice”.

The St. Louis Blues put out a video yesterday that showed what Oshie’s winner looked like around the country. Or watch the entire shootout from NBC here.

It’s not a secret in St. Louis that Oshie is in his own category when shootouts come around. It’s also not a secret that Oshie is an awesome human-being. While T.J. already had the goals of the night, he gave the soundbite of the night after the game. When a reporter referred to his performance as being “heroic”, Oshie set the record straight b y saying “The American heroes are wearing camo. That’s not me.”

KSDK did an interview with the future Mrs. Oshie about her fiancee. While I question why KSDK is interviewing her, she is a pretty good interview.

Russians are protesting the Canadian/American referee that officiated the game outside the United States Embassy in Moscow.

The Mizzou football team was honored at halftime of the Mizzou basketball game on Saturday in Columbia. Approximately 15 people from Westboro Baptist Church were in Columbia to protest against Michael Sam and his recent decision to tell the world who he really is. As many as 1,000 people showed up to counter-protest the WBC supporters.

Sam did his “sack dance” during a standing ovation from fans. He also did the dance at his graduation back in December.

At a conference put on by the Human Rights Campaign in Las Vegas on Friday, Ellen Page came out as gay. She gave an incredibly moving speech.

Bode Miller won a bronze medal in the Super-G skiing competition yesterday. He has had rough time coming back from knee surgery and most importantly losing his brother. NBC milked that tragedy that was the death of his brother for all it was worth in the post-race interview. I’m 99% sure that some hack at NBC told reporter Christin Cooper to make Bode cry. The interview is super awkward, especially when you consider that Silver medal winner Andrew Weibrecht is standing right next to Miller. Judge for yourself. Here’s the video from SB Nation

This doesn’t effect anyone watching the Olympic coverage but it surely makes every other journalist in Sochi hate NBC. The network is operating a full Starbucks in it’s special area. The Starbucks is pouring free coffee 24 hours a day. It’s staffed by Starbucks employees flown in from other parts of Russia. It’s kind of a dick move by NBC but fully withing their rights for the money they are paying. It would not be a dick move if they were flying in Americans to staff the Starbucks. Know what else is within their rights? Shitty coverage of the Olympics.

Yesterday HBO released the second trailer for the fourth season of Game of Thrones, which premieres on April 6.

Modern medicine exists for a reason. Jamie Coots, the star of Snake Salvation on the National Geographic channel died over the weekend, apparently from a snake bite. He was handling a poisonous snake during a service at his church when he was bitten. Paramedics were called to the church but were redirected to Coots’ home. Coots refused medical attention and sent the paramedics away. They returned to his home an after later to find him dead.

The funny, funny man starts his gig taking over for Jay Leno tonight. His lineup for the first week is stacked with guests like Lady Gaga, Michelle Obama, Jerry Seinfeld, Kristen Wig and Justin Timberlake among others.

The tape of his audition for Saturday Night Live is making the rounds.

Kyrie Irving was named the MVP of the All-Star Game, 163-155 Eastern Conference win. The highlight video the NBA put out using its “Phantom Cam” looked much better than those shirts.

Nelly was part of the Pharrell Williams opening performance along with Snoop Dogg, Busta Rhymes and Diddy

The jerseys from Adidas were terrible. The design was made worse considering they were basically t-shirts. Apparently the NBA doesn’t care what their players think considering most of them hated the Adidas shirts they were forced to wear on Christmas Day.

The Slam Dunk contest was an ugly, ugly mess.

St. Louisan Bradley Beal put up a great effort in the three-point shooting competition on Saturday, but ultimately finished second. Nelly was of course there in the front row to support his buddy.

The Second City Network put this video out over the weekend featuring women reading some of the messages that they get sent via dating apps aloud on camera. Huffington Post has the whole story. Warning: It’s not-safe-for-work but hilarious. Those of us who don’t send stuff like this will feel like better people after watching this.

The Saint Louis University Billikens beat Virginia Commonwealth over the weekend in front the “Billiken Blizzard” crowd at Chaifetz Arena. It was their 17th straight win. The Billikens are now ranked tenth in the country by both the Associated Press and the USA Today Coaches Poll.

Lots and lots of people went to the movies over the Presidents’ Day Weekend. The Lego Movie brought in $50 million in its second weekend of release. Its receipts are now over $160 million. About Last Night brought in a solid $26 million in its opening weekend and RoboCop brought in $21 million. The Monuments Men finished its second weekend with $15.5 million and Endless Love opened with $13.2. Winters Tale brought in a dismal $7.2 million. We’ll have a more in-depth look at the numbers on Thursday as part of our Weekend Movie Guide.

The Holderness Family Is Back With “Snow Day”

The folks who brought us “Christmas Jammies” are back.