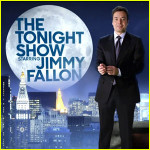 This week was Jimmy Fallon’s first week taking over The Tonight Show. There seemed to be some debate in the beginning about Jimmy being worthy enough of the spot. I read he’s too timid, humble, hes’ the “nice guy,” his first show was “strangely muted,” and other nonsense articles. And I thought to myself, why does it matter if he’s nice or that he’s not so stuffed with confidence that it seeps out of his ears, or that he likes to make friends? And then I read an article on Time, Entertainment.time.com, which speaks perfectly to the kind of person that Jimmy truly is, the reason he has awesome celebrities who are willing to come out and sing and dance with him, get egged, and participate in fun and crazy stunts, and the reason he will rock The Tonight Show!

It’s because of his awesome personality and understated talent that he has been so successful. Celebrities clearly love him, coming out in spades this week to support him in his new endeavor. He has been trending on Twitter all week with overwhelmingly positive reviews and has been killing it in the ratings. If you missed The Tonight Show with Jimmy Fallon this week, you can catch up on Hulu, or watch clips on nbc.com or YouTube. Here’s a breakdown of the best moments from the first week of The Tonight Show Starring Jimmy Fallon, and in my opinion the best week of The Tonight Show ever.

The Evolution of Hip Hop with Will Smith

“Remix to Ignition” done by Jimmy and his barbershop quartet, The Ragtime Gals

First, he had Michelle Obama on the show. Second, he got her to say Ew! several times for his Ew! sketch, which was awesome!

Will Ferrell performs his ice skating routine (minus skates) in his spandex butler from Downton Abbey tux.

History of Rap 5 was born. Besides that, the whole episode with Justin Timberlake was one of the funniest things I’ve watched in awhile. It was non-stop laughter from beginning to end. You should really watch the whole show.

And this is just the beginning, folks. Tune in weeknights at 10:35pm CST on NBC to watch Jimmy bring more awesomeness to The Tonight Show.