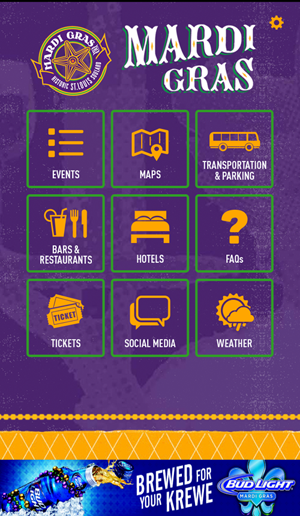 Mardi Gras Inc., the non-profit that runs the Mardi Gras celebrations in St. Louis, unveiled their new mobile application today. The app is available for both iOS and Android devices.

Here’s how the app was introduced

Soulard Mardi Gras—there’s an app for that! Everything you need to know about the Beggin’ Pet Parade, Bud Light Grand Parade and the T-Mobile Fat TuesdayParade, and other events all in the palm of your hand.  Get the scoop on the Bud Light Concert Stages, hotels, parking, transportation, Soulard restaurants, weather and more, on the all-new Soulard Mardi Gras mobile app at the App Store or on Google Play. Appy Mardi Gras!

Here’s the post we did about the 2014 Mardi Gras season in St. Louis, including tips to make sure you have an awesome time on Grand Parade Day.