Ok, I will admit that I am a Johnny Come Lately on TV shows.  I am notorious for making my husband go and rent all past seasons so I can catch up before the last season. It started with The Sopranos. That show was on the air 7 years before I decided I wanted to be a Sopranos Fan.

Then a couple of years ago I decided to watch an episode of a little known comedy series The Big Bang Theory. Before I knew it, I watched all 3 seasons before the season four premiere. Just recently, I watched all of the Breaking Bad episodes so I could yet again catch up before the last few episodes in the last season. 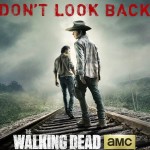 Finally, about a month ago I started watching episodes of The Walking Dead because I heard that the second half of Season 4 was going to be airing in February. So every day I watched an episode while walking on the treadmill (funny – walking on the treadmill while watching The Walking Dead). So Sunday was the premiere of the second half of season 4. It was a great episode and I found myself wanting to forward to the next episode after watching it. And when I couldn’t, I started feeling withdrawal symptoms. The fact that I can’t watch the next episode for the next seven days is kind of saddening. So now I’m thinking I should have waited until the last season to start catching up. I clearly can’t handle waiting each week to see the new episodes. Does anyone else have this problem? Are there support groups out there for people like me?

I’m not sure why I can’t find a great series that I can say I watched from the very beginning to the end. A lot of the shows that I start watching from the beginning have been cancelled. Seriously? I’ve been watching The Goldberg’s and The Middle, so hopefully they don’t cancel them. Just in case though, does anyone have a good series I can start to “catch up” on Netflix? I hear this Downton Abby has something to it? What are your thoughts?