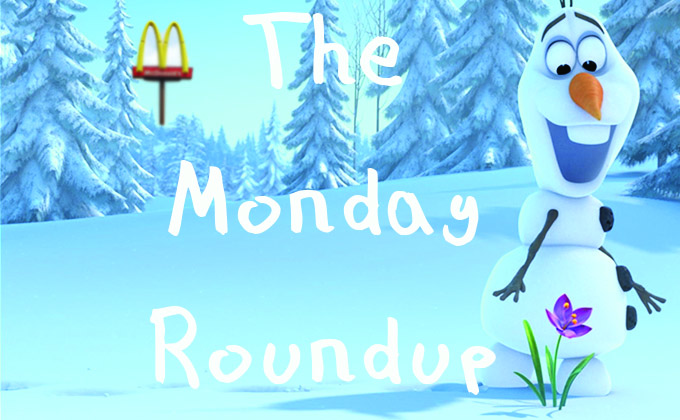 As I write this it’s -5 degrees outside and feels like -27. It will warm up to just above 0 today before dropping back to -6 tonight. In Chicago, temperatures hit -16 this morning and they will feel like between -40 and -50 throughout the day. The Southern Illinois-Carbondale basketball team had to stay in a church overnight when their bus got stranded and their coach, who was driving separate, slept in his car. Most schools across the St. Louis area were closed today and could be closed tomorrow as well.

Frozen earned another $20.7 million to take the top spot. It has now earned $297.8 million in six weeks. Paranormal Activity: The Marked Ones  opened in second place with $18.2 million and The Hobbit: The Desolation of Smaug was third with $16.3 million. The Wolf of Wall Street earned $13.4 million and American Hustle rounded out the top five with $13.2 million. We’ll have a more in-depth look at the numbers on Thursday in our Weekend Movie Guide.

A high school science teacher ate only McDonald’s for three months and got healthier. He made responsible choices and also started walking for 45 minutes a day. The coolest part is that he didn’t pay for any of the food.

This happened in the stands while Oklahoma was trouncing Alabama in the Allstate Sugar Bowl. OutKick The Coverage identified the mom and you should read it because she’s just as crazy as this video would lead you to believe.

Is Madonna The Worst Mom Ever?

She posted a picture of her 13-year old son and a couple of his friends posing with bottles of alcohol. Vanity Fair thought it was ridiculous that people were upset.

Some moms have a hard time dealing with their sons growing up.

Why Would You Turn Down $3 Billion?

The founders of Snapchat turned down a $3 billion offer from Facebook. Snapchat CEO Evan Spiegel explained why to Forbes. The Snapchat story is a pretty crazy one, from the founding to the lawsuit to the hack Spiegel won’t apologize for. Expect things to get even nuttier because Spiegel isn’t the most likable guy.

The 2014 International Cosumer Electronics Show begins Tuesday in Las Vegas. Lots of cool things will be announced. Lots of people who would normally report from the show likely won’t be able to make it.