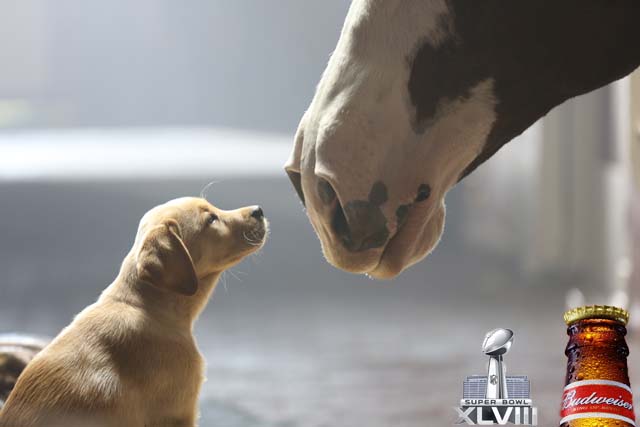 Actor Don Jeanes returns for Budweiser’s 2014 Super Bowl commercial titled “Puppy Love”. It follows the winning model of 2013’s “Brotherhood”, but with the Clydesdales bonding with new friend this time around.

Here’s more about the commercial from Adweek.

And here’s the commercial. Scroll down for more words and a collection of previous Budweiser Super Bowl commercials.

Actor/Model Don Jeanes had been in a variety of commercials and made guest appearances on a variety of shows. He played Neil Armstrong in 2011’s Transformers: Dark of the Moon. Actress Melissa Keller plays the owner of a puppy adoption center, albeit very briefly. She played Mindy, the girlfriend of the varsity team captain in D3: The Mighty Ducks. See her at 2:49 of this video.

The background music is provided by Passenger with “Let Her Go”.

The Clydesdales are of course synonymous with Budweiser and Anheuser-Busch. They’ve been a fixture since April 7, 1933 when August A. “Gussie” Busch, Jr. and Adolphus Busch III surprised their father (August A. Busch, Sr.) with six of them and they set off to deliver the first post-prohibition cases of beer.  The horses are such a part of the company that their care and travel is an operation all its own.

The Today Show is currently running a bracket showdown of the best Super Bowl commercials of all time. Three of the final four tout Budweiser and two of those feature Clydesdales.

Anheuser-Busch continually turns out iconic commercials. Aside from Clydesdales, commercials have featured real men of genius, frogs, ferrets, Spuds Mackenzie and football-playing beer bottles through the years. Here’s a collection we put together using Huzzaz.

This Weekend in St. Louis Ryan 684 days ago.

This Weekend in St. Louis Ryan 685 days ago.