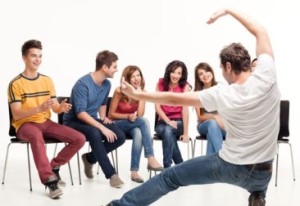 The holidays have arrived, and with the holidays come family traditions. A tradition in my family ever since I can remember is playing games on Christmas Eve. We’re a family of game lovers and competitors…although my family might argue that I’m the only competitive one. Anyway, every year we buy a new game to play on Christmas Eve. About a week ago, I received a text from my sister that said: “New game!!!! Funny or Die!! I’m getting it for us for Christmas! Check it out.” That’s seven exclamation points there; obviously I had no choice but to check it out. And I’m glad I did, because I agree; this is the perfect game for my somewhat loud, somewhat inappropriate, and very entertaining family. So this Christmas Eve, we’ll be playing Funny or Die. 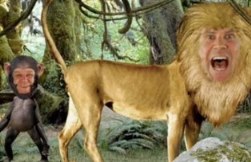 : The game is based on FunnyOrDie.com, the comedy video website started by Will Ferrell and Adam McKay several years ago. The videos get voted on by the users of the site and those that get the least number of votes “die.” The game is similar, only the videos are replaced with cards with funny pictures on them. The players create funny captions to go with the photos, and then each caption is voted on. The caption with the least votes “dies.” Ummm…I’m pretty pumped for this game!

There are several other great games on the market right now that are also well worth checking out, whether it be on Christmas Eve with family, New Years Eve with a group of friends, or at a random party with a group of strangers (just kidding…although that sounds kind of fun). 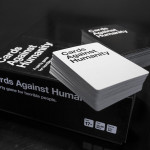 Cards Against Humanity: This game is all the rave. I read an article that they raised their price by $5 on Black Friday and sales still increased. It’s also a card game, but with funny phrases instead of photos. And there is a Card Czar each round who determines who’s fill-in-the-blank card response is the funniest. The game is rather inappropriate so if your family is more conservative, you might not want to try this one. The website offers examples of phrases on the cards. It also has an FAQ area called ‘Your Dumb Questions’ and a theme song called “A Good Game of Cards.” It’s about 3 minutes and not appropriate to play in an office or around children, but pretty funny. 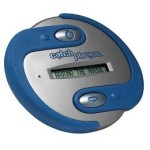 : An oldie, but goodie. I love it because it’s good for travel. It fits in a medium sized purse and can be easily carried to play at other people’s houses, in bars, in taxis…pretty much wherever, without worrying about a big box or losing game pieces. There are also several editions to choose from. The regular edition where you try to get your team to guess the phrase on the screen out of a list of categories such as Food & Drink, Technology, Entertainment, etc., and pass (or throw) the game to the next player before the buzzer goes off. Then there’s the newer Scrabble edition, which I know nothing about, but imagine it’s more fun than regular Scrabble. And my favorite, the music edition, where you quote lyrics, hum, or sing to get your team to guess the song listed. I have a horrendous voice, but I will not hesitate to sing the same chorus over and over, each time a bit louder with additional hand gestures to force, I mean encourage, my team to guess it or otherwise endure my wrath.

The Greatest Game You Will Ever Play: I don’t know if this is the actual name. I’m actually not sure it has one. I also have not had the chance to test it out, but from the examples that Buzzfeed presented in their “This Is The Best Game To Play With Your Family Over The Holidays” post, I feel pretty confident that it will be enjoyable. Also, it’s free. All you need is paper and pencils. It’s simple; you write a sentence on a piece of paper, then pass it on to the next player. That player then illustrates your sentence. They then pass their drawing on to the next player for them to write a sentence on what they think is being illustrated. Continue until it gets back to the original sentence maker. Then, as Buzzfeed states “Watch hilarity ensue” as you compare the original sentence to the aftermath. It can be played with children or adults. You can make it as age appropriate or inappropriate as you want. And as far as I know you can give it any name you want.

Charades: Take it back old school with a simple game of charades. You don’t even have to purchase an actual game. There are tons of Charades apps that you can download on your phone and play. I have one called Heads Up!, which I just recently found out was created for The Ellen Show. It has over 20 categories. I downloaded it one night at a party after an intense game of Twister wore us all out. There are plenty of other versions to choose from as well: Flipside, Party, and Holiday to name a few. Here’s a video of Ellen playing Heads Up!.

If you enjoy charades, but want something more than just a phone app, there are several good board game style options: HedBanz

, where you get to wear head bands with your card placed on them. There’s both an adult and kid-friendly version. And Reverse Charades, where multiple people act out what is on the cards and one person keeps guessing until the timer runs out.

Are there any other awesome party games that I missed that you recommend trying out this holiday season?

All games can be purchased using the affiliate links

This Weekend in St. Louis Ryan 676 days ago.

This Weekend in St. Louis Ryan 677 days ago.