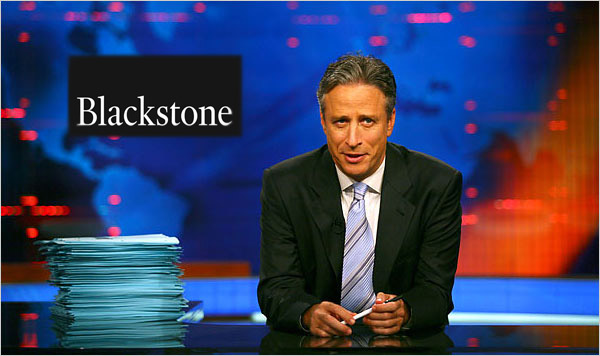 You may not have heard of Blackstone before but odds are The Blackstone Group L.P. owns something you have heard of before. In fact, it owns the Hilton Hotels chain. There are Hilton family hotels in St. Louis so, that’s why we feel this is relevant for this blog to write about. Well, and because Jon Stewart talked about it. Here’s the video from Jon Stewart’s The Daily Show

Didn’t feel like watching the whole thing? Let me explain. Blackstone bet money that Codere would default on a loan to a different company. They then went and paid off Codere to default on the loan, thus winning their bet. How in the hell is this legal? We live in a world where Pete Rose gets banned for betting on his own team to win, but a huge company can pay another company to essentially “throw the game”. I’m probably being ridiculous in comparing it to that, but that’s how I see it. Bloomberg actually knows what they are talking about and described the deal.

This is just the latest sign that Blackstone and the like are setting America up for a really bad crash. Remember how a lot of people lost their homes? Blackstone now owns more single-family homes than anyone else in the nation. They bought 1,400 homes in Atlanta in a single day recently. Housing prices across the nation are on the rise. It’s not because more people like you and me can afford to buy homes. It’s because people on Wall Street can afford to pay more for the homes in cash than normal folks can afford to pay through traditional financing.

Why are folks like Blackstone willing to pay for these homes? Not only are they going to make money by renting them out; they are also making money by selling bonds backed by those monthly rent checks. These Wall Street firms that brought down our economy in the first place are now somehow making money off of it.

Pretty sure the only hope the “little guy” has is winning the Mega Millions jackpot on Friday.

This Weekend in St. Louis Ryan 871 days ago.

This Weekend in St. Louis Ryan 872 days ago.