Halloween is my favorite holiday. Not only do I love chocolate and candy, I also love haunted houses and dressing up in crazy costumes. For example, on one of my random trips to Johnny Brock’s (I go there more than one should), I found this pair of cute, hot pink furry booties. But I really had no reason to wear them. I bought them anyway. Then, at Taste of St. Louis, I bought these awesome glow teeth, because why not? So then comes Halloween, and I’m strolling through Johnny Brock’s thinking of what costume I want, when I see this headband with little springy mesh tendrils that light up, and I knew…a raver. I added a bright colored t-shirt, funky back pack, leggings with glow stick print on them, and of course, glow sticks. I was in heaven!

#1. Duck Dynasty – For some of you men that won’t even be difficult, as it appears long, unruly beards are in. You can find Duck Dynasty products practically anywhere, so it shouldn’t be too hard. A quick run to the store for a duck caller and a red, white, and blue or camouflage bandanna. A Goodwill or Salvation Army stop for camo pants, and a white or black t-shirt and you’re set. If you don’t have a beard, you will need to get one, which is the fun part. Check out these ridiculous beards 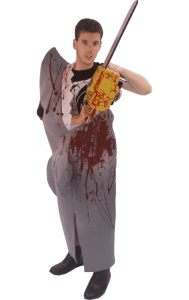 #2. Sharknado – It’s actually a pretty simple costume. Fake blood, clothes you don’t mind covering in fake blood, and a plastic toy shark. Although, if you want to make it extreme, rent a shark costume and somehow attach it to your body so it looks like it’s eating you, and it’s actually as large as you. That will be a heavy load to carry around all night, but well worth it. Of course, creativity comes in coming up with new ‘nado ideas. I’ve heard Crocnado, snakenado, and alienado. All would be interesting to see.

#3. Orange is The New Black – While this doesn’t take much effort, it will certainly make you popular. Everyone will want to discuss your thoughts on what will happen next season and how the show won’t be the same without Laura Prepon, etc. Or you could go as Pennsatucky and get some rotten teeth

and create a fake cross shank. Or if you’re a couple, you could dress up as Piper and Larry or Piper and Alex. So many options… 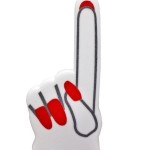 #4. Miley Cyrus alone (or a couple as Miley and Robin Thicke) – Obviously going as just Miley would be plenty of fun in itself, as there are so many choices. Honestly, you can get a unicorn onesie

for $30 online and you’re set. Although you have to be willing to twerk all night, because you know that’s what the people want to see. However, as a Miley and Robin couple, you are unstoppable. A Beetlejuice suit

will work just fine for Robin. And a nude colored swim suit or bra and underwear can be purchased anywhere. They even sell the “Twerk Foam Finger”

online for $10, and fake tongues

for around $2. But here’s where it truly becomes a costume – switch it and reverse it. Bam! You’re welcome.

And  last but certainly not least…

#5. A Fox – All you need is a fox suit and a mouth. Yes, you’ll be having people coming up to you all night asking, “What does the fox say?” And the only acceptable answers come  from this video:

If you want to make it a group theme, some people could dress as the dancers with the suit and tie, and mask. Or, you could each wear an animal costume from the video. By the way, if you choose this option, please have a fish and elephant costume, and invite me to where you will be so I can hear the ‘Blub’ and ‘Toot’ sounds.

I also love group costumes that follow a celebrity through the years. One of the salons at the 2012 Pink Party created Madonna through the years. This could work for tons of celebrities, both female and male: Britney Spears, Lindsey Lohan, Johnny Depp, Brad Pitt, or those who change weekly like Lady Gaga. And for some of them, people will be able to tell who you are even when you’re waiting in line for the bathroom without your crew. 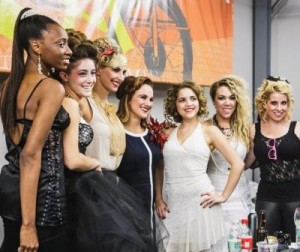