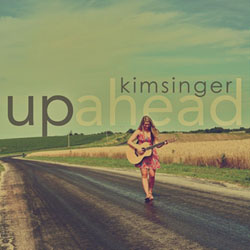 Local singer-songwriter Kim Singer will be releasing her debut EP Up Ahead  on September 24 with a show at Foam on the corner of Jefferson Avenue and Cherokee Street in South St. Louis. The release is a result of her successful Kickstarter campaign that we wrote about last month.

The title of the EP is a nod to just starting out and looking at a future waiting to be written in the music industry. Singer, a 19-year old resident of South County and a student at St. Louis Community College wrote all seven of the tracks on Up Ahead. She is currently working towards an Associate Degree in Music with plans to continue her education by studying music in Nashville.

We first interviewed Kim last month prior to her opening for Jillette Johnson. Singer played a short set with her band that night at The Firebird and then gave way to Johnson. Singer was impressed how Jillette kept the crowd on their toes throughout the show while keeping the set stripped down to just her voice and her piano.

Up Ahead was recorded at the studios of Electropolis in South City. Owner Tim Gebauer has worked both with local singers and for large national corporations like McDonald’s and Ab-InBev.  Kieth Harris worked on  the album along with Gebauer, Gabe Doiron and Kyle Tilley. Tilley is Singer’s brother-in-law and is a constant presence in the band at her live shows. Some session players from Nashville played on the album as well, including one who used to play electric guitar for The Band Perry.

We decided to check in with Kim again prior to this next step in her music career.

What are the tracks on the album?

If you had to pick one thing that you learned while recording, what is it?

One thing I think I learned from recording is that it’s not all about singing the right notes but its about the heart behind the song and the lyrics you’re singing. People can hear that in your voice if you sing with emotion. Going into it, I wanted to sing it all perfect but listening back at what we got, I love the little imperfections and hoping that people can really connect to the message of the songs. 🙂

What was the coolest part of recording Up Ahead?

Everything was cool about recording! From being in the studio to helping create the artwork and of course getting the final products back blew my mind. These songs sound expensive! Haha

What’s some background on the guys in the band?

I haven’t played with the exact same band at any of my shows expect Kyle Tilley, my brother in law (who plays rhythm electric and background vocals) plays at all of them and I’m so thankful he does! All the other band members are my friends. I’m so thankful their willing to give up their time and talents to play with me!

The EP will be released next Tuesday (September 24) with a free show at Foam Coffee & Beer. Caleb Wolz and Cannon Field will be opening for Kim Singer. Copies of the EP are available for pre-order. It will also be available on iTunes, Spotify and Amazon on the day of the show. You can bet she will play each song on her EP as well as her excellent cover of  “I Wanna Dance With Somebody”. Here’s one of her originals, “Cafe On Broadway”

Singer’s parents are certainly pleased with the finished product that is Up Ahead.
Brought to you by Mills Properties.