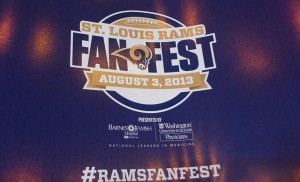 My husband and I went to the Rams FanFest at the Edward Jones Dome last Saturday to check out the new and improved Rams along with 15,000 other screaming fans. As a Rams fan who has attended every home game for the past two years, I’m extremely excited about the upcoming football season!  Especially since ESPN and other NFL outlets have been buzzing about how awesome the new players are and even throwing out the idea that Tavon Austin, our #1 draft pick is sure to be Rookie of The Year!  When I attended the draft party at Dave and Busters in April, I saw how amped people got after seeing how the Rams’ draft played out, so I was happy to finally catch a glimpse of the rookies in action to see if they lived up to all the hype.

Les Sneed, the Rams General Manager, started the practice by speaking to the fans about what to expect from this year’s Rams.  He seems really certain that the Rams have the potential to go all the way. Past Rams player, Isaac Bruce, was also out on the field coaching and giving tips to the new players during the 2 hour practice.

Now on to assessing the new talent…well as much as a scrimmage against your own teammates with no tackling could showcase talent.  The practice started off with each division of the team running different drills along the field. Fisher was out there closely watching his players during each pass.  He seemed to be focused on the quarterbacks and the receivers.  Zuerlein, our kicker, got a chance to show off his moves with several field goal kicks. The last one, for fun to try to beat the current NFL record, was from 64 yards. Although he missed that one, all of his other kicks made it and I thought he looked really good out there. One of these days he’ll make 64 yards and claim the record.

I was most looking forward to seeing Tavon Austin, and from what I noticed, he does indeed live up to the hype.  He caught every ball thrown to him, was super fast and looked determined and focused.  He even made it into the end zone a few times during the scrimmage. Other players that I thought stood out and will hopefully get to see more of this year are Bailey, Cook and Quick…if they continue to impress and make the team after the final cuts.

After practice was over, the players went around the field signing autographs on fan memorabilia. Here’s my Rams flag, which I bought at the Rams’ draft party two years ago and has been signed by some of my favorites, including Amendola and Finnegan. We got a few more signatures this year from some rookies that we’re hoping are going to take us all the way. 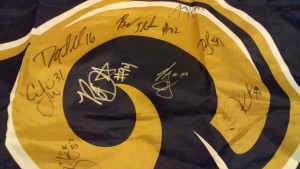 Here are more pictures from the event:
Hopefully last night’s pre-season-opening loss to the Browns isn’t an indicator of how the season is going to be. If the Rams play like that we are in big trouble!  I’m choosing to remain hopeful since I do understand that pre-season games don’t count and the coaches mainly use those games to decide who is going to make the cut. I can also give some leniency since our offense wasn’t using the full playbook. So no worries STL!

This Weekend in St. Louis Ryan 806 days ago.