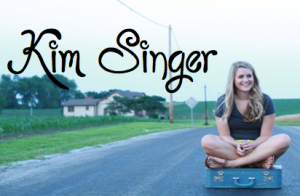 I don’t blame you if you have never heard the name Kim Singer before, I hadn’t before last week. I was buying tickets to see Jillette Johnson play The Firebird and noticed an addition to the lineup. Kim will open for Johnson on the 29th of this month.

Who is Kim Singer? She’s a 19-year old singer-songwriter from the South County area here in St. Louis. While she’s been playing the guitar since she was 10, she just recently branched out from the world of school and church choirs. When she takes the Firebird stage on August 29th, it will only be her fourth show in public.

I got a chance to see her third show over the weekend at Foam on Cherokee. I was expecting a low-key set with just a girl, her guitar and a microphone. Kim instead brought some friends along for her 30-minute set. Three guitarists and a drummer joined her on stage. Singer herself was never without an instrument while singing. Along with the acoustic guitar, she also played an electric guitar and a ukulele during the set. Kim also plays the piano, but the tight confines of the Foam stage didn’t allow for one on this night. The band played several of Singer’s songs as well as a few covers. They ended the set with a cover of Whitney Houston’s “I Wanna Dance With Somebody”, which Singer says is her favorite song to cover. She covers the Whitney Houston classic in the style of Ben Rector.

In true songwriter form, Kim saves she is most influenced by Dave Barnes, who she counts as her favorite artist as well.  Barnes was nominated for a Grammy Award in 2010 in the “Best Country Song” category for “God Gave Me You”. Blake Shelton sang the song all the way to the top of the country charts and sold over one million units.  Barnes has also written for Matt Wertz, Billy Curington and Tim McGraw.

Singer is currently attending St. Louis Community College working towards a associates degree in music. Her plans are to move to Nashville after school to pursue a 4-year degree in a music-related field. Being a lifelong St. Louisan, Kim will miss some of her St. Louis favorites:

“Skyzone! A place filled with trampolines? Does it get any better!? Also Fitz’s, Busch Stadium, any coffee shop with delicious chai tea and any place where I am surrounded with my great friends and family”.

Kim recently launched a Kickstarter campaign to fund an EP. As of this writing, the project is almost 70% funded with just a couple days left. Here’s the video introducing herself and announcing the project.

After seeing Kim play and interviewing her, I’m confident she has the drive and determination to go with the musical talent. How did she manage to get a gig opening for Johnson, whose debut album as been getting major praise across the nation?

“The show came about by me just asking to play! I guess I got lucky!” She said.

Guess it is true that it never hurts to ask. The show at The Firebird is happening Thursday August 29th. Door open at 7:30pm with the show starting at 8:30pm. Tickets are $10 with a $2 surcharge for minors.

I leave you with “Cafe”, a Kim Singer original song.