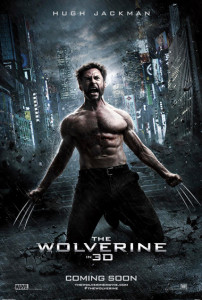 Planning to go see a movie this weekend? Here’s what is out there in the St. Louis area. It’s the RealLifeStl Weekend Movie Guide.

Opening nationwide today, this movie stars Hugh Jackman and is the sixth film in the X-Men series if you can believe that. Word is that Hugh Jackman refused to drink anything for 36 hours before he filmed shirtless scenes for the movie. Just so he looked better than the average dude, I guess.

Here’s the synopsis from Twentieth Century Fox via IMDB:

In modern day Japan, Wolverine is out of his depth in an unknown world as he faces his ultimate nemesis in a life-or-death battle that will leave him forever changed. Vulnerable for the first time and pushed to his physical and emotional limits, he confronts not only lethal samurai steel but also his inner struggle against his own immortality, emerging more powerful than we have ever seen him before

Check out the trailer

This teenage “coming of age” comedy has the potential to do really well in “word-of-mouth” ticket sales. It’s written and directed by Maggie Carey of Funny or Die fame. Rumor is the film only cost about $1.5 million to make. It’s not playing at a whole lot of theaters so you might have to dig a bit to find it. The movie stars Aubrey Plaza, who you might know from Parks and Recreation. Bill Hader, Rachel Bilson, Andy Samberg and Connie Britton all make appearances in the film as well.

If you’re looking for a family-friendly movie this weekend. . . this isn’t it. Here’s a SFW clip from the movie though.

This horror flick opened to the tune of almost $42 million last weekend. Typically these kinds of films don’t get high scores from the masses. This one did, according to Box Office Mojo. The movie is being added in another 191 theaters across the country and will play in 3,022 across the country. By comparison, The To Do List is only playing in 591 in its opening weekend.

Here’s a trailer. Watch at your own risk, it is based on a true story after all.

The Adam Sandler project opened two weeks ago and has grossed close to $90 million dollars. It’s the sequel to the 2010 movie that grossed $162 million and includes the same cast of characters such as David Spade, Kevin James, Chris Rock and Selma Hayek. Shaquille O’Neal and Nick Swardson (Reno 911) also have parts.

Haven’t been to the movies in awhile? Paying the big bucks to see these first-run movies isn’t really your scene? Maybe you need to check out Keller Plaza Cine 8 like I did. Here are two movies that came out a bit ago, but are both still playing on the cheap at Keller and Saint Andrews Cinema.

There are some movies that you just need to see in theaters.

This Weekend in St. Louis Ryan 884 days ago.