This past Saturday marked the “soft-open” for the third location in the International Tap House family. The newest location occupies the space at 16. S. Euclid Avenue that formerly was home to the Loading Zone. News of the project was first reported by STLHops in October of 2012. As of today, the spot is officially open.

The work the iTap crew has done to the space will amaze you. All three floors of the building are being used for beer consumption purposes. Whereas the first two iTap locations feature 40-ish beers on tap, this location features over 60. The cooler area still features your favorite bottles from around the world. Televisions are behind the bar of course. Televisions are also in abundance throughout the upper floors. 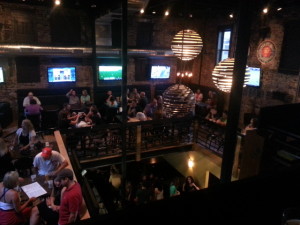 With all of the space in the new location, there is a seating option for everyone. You still have your stools at the bar to belly up to. You still have your tables down across from the bar. Go to the second floor and you have your pick from tables and stools overlooking the bar or lounge areas with black leather couches and lower tables. Televisions are everywhere on this level so no matter where you sit, you will have a great view. Moving up to the third level, you find some overstuffed chairs for lounging as well as bigger tables to accommodate larger groups.  Service and comfort were definitely taken into account when planning this location. Men’s and women’s restrooms can be found both on the ground level as well as the third level. A computer station on the second level allows servers to transmit orders down to the bartenders that “runners” can then bring upstairs during busy times.

Speaking of restrooms, the men’s room even offers some helpful advice above the urinals. 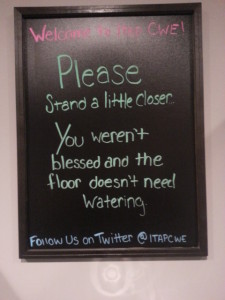 When I was in attendance for the soft-open, local musician Adam Stanley was set up on the third floor of the establishment overlooking the crowd. It’s a perfect spot for live music.

As is the policy at the other iTap locations, food is not served. You are, however, allowed to bring in whatever food you would like. Considering Central Table is directly across the street and the Central West End isn’t exactly a restaurant desert anyway, you have no reason to go hungry.

International Tap House owners Sean Conroy and Brad Lobdell opened their first location in Chesterfield Valley in 2009. Their second location opened in Soulard in 2010. Their fourth location is scheduled to open in August of this year in Columbia, Missouri. That location will be located directly across from the University of Missouri campus in the new 308Ninth building. iTap will be a tenant on the ground floor with loft apartments occupying the upper floors. A Jimmy John’s and a Varsity Clips will share the ground floor with iTap.

Conroy and Lobdell’s friendship dates back to their undergraduate days at the University Of Missouri in the mid-1990s. Conroy left KTVI back in 2011 after 8 years as a reporter for Fox 2 News.

According to an article last year from Sauce Magazine, the CWE space was originally scheduled to be 3,500 square feet, which would be 1,100 square feet larger than the original Chesterfield location and 100 square feet smaller than Soulard. In a message from co-owner Sean Conroy, the official capacity is 190 persons and the final square footage is tricky to calculate with the mezzanine area, but is considered to be about that 3,500 number.

Jason Chew and Nick Kobel make up the management team at the new location. Chew has been with iTap since it was a one-location franchise and moved on to manage the Soulard location when it opened. Kobel is also a veteran iTap employee. He met his wife at the Soulard iTap and got married there on the day after Thanksgiving last year.

Here are some pictures of the awesome designs that adorn the brick within the newest International Tap House location.

This Weekend in St. Louis Ryan 776 days ago.