What is the appropriate age to start using social media? A question that hasn’t really been addressed since social media hit the mainstream. Do we go with 13 because that is what Facebook decided?

Let’s take a step back.

I grew up when pagers and, later in college, cell phones were the latest technology. Only some people could afford to get the cool new gadgets but they did allow us to be more easily connected with our friends. While a little more connected, it still required an actual conversation and patience for a call back (before texting was popular). We never sent inappropriate snapchats or texts. We never asked a girl who she liked anonymously online- that, you sent a friend over to ask them on the playground. We never suffered from selfieitis.

Unfortunately, bullying has always been around and will likely never completely become extinct. At least in  the 80’s and 90’s, we were bullied (some more, some less) at school but we were able to escape when we were ‘unplugged’ at home. Unless someone called, there was no social interaction after school hours which allowed for some decompression. 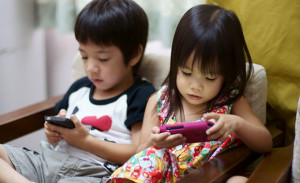 Children are growing up social. My one year old already knows how to work an iphone. Times have certainly changed. Change is almost always good; we just need to adapt more quickly now than ever. Children feel like they are entitled to technology and social media. It is up to parents to decide when their child is mature enough to participate.

Today, children are always connected to their peers. There is no down time when they get home. Whether they are texting friends, asking/answering questions on ask.fm, having beauty contests on instagram, snapchating, or tweeting, there are endless ways for their fragile self-esteem to take hits twenty-four hours a day. Young people have no fear or modesty when it comes to social media. My cheeks often turn red in embarrassment when I read tweets from younger people. Even more frightening are those that are victims of bullies are often the ones seeking approval on social sites from complete strangers. It’s no wonder cyberbullying is so common.

As parents it is important that we understand all the social outlets that our children have access to. It is also important for families to set some time aside each day when all devices should be shut off, parents included. While it may seem hokey, a family online safety contract is actually a really effective tool.

What are your thoughts on children and social media?

Photo courtesy of qsl.net and Lookout

This Weekend in St. Louis Ryan 736 days ago.

This Weekend in St. Louis Ryan 737 days ago.