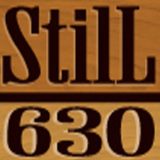 If you’ve been to Soulard or a ballgame lately, you have probably passed StilL630. You may have just thought it was another lot people parked in when they go to Busch. I have known what was going in there for a while, but didn’t think to stop until one day on the way home from work.

I was casually driving down the road, listening to some country music at a respectable volume, when I saw a sign outside StilL630 that said “free tastings.”  I busted a U-turn faster than any Dodge Caliber-driving-fool has before.

Inside I was treated to a tour of the building by the owner, David Weglarz. This guy is passionate about what he is doing. He is focused on putting out top-quality spirits. Tours are offered every Saturday and Sunday, twice a day. Call 314-513-2275 for more information. StilL630 is a pretty small operation here in town. While the tour isn’t long, it is well worth it considering the guys actually making the spirits are the ones showing you around. Hear the stories about the individual machines. On my tour, David pointed out a barrel that they had been ageing whiskey in. That particular barrel was going across the street to 4Hands Brewery soon to be used in brewing some beer.

StilL630’s products can be found in a variety of places all around the St. Louis area. According to the company blog, a cocktail created by David, the MO Mint Julep, will be featured on the Mike Shannon’s menu with a new dish they are introducing. The Libertine, a new restaurant in Clayton that features Chef Josh Galliano, showcases the Rally Point High Rye Double-Oaked whiskey on tap from a barrel at the bar.

The distillery’s Big Jake White Dog Whiskey and Rally Point Rye Whiskey are the products that are found in area stores, like The Wine and Cheese Place in Clayton. Guyism reviewed the Rally Point back in April and thoroughly enjoyed it. That review came shortly after the blog gave a glowing initial review of the business.

In the same frame as the Anheuser-Busch Brewery tour is a must-do in St. Louis, put the StilL630 tour on your list as well.  The distillery is located at 1000 S. 4th street in  the old Riley’s Florist building.  They can be reached on the web, on Facebook or on Twitter.