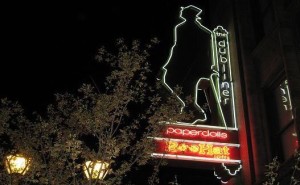 The Dubliner is a popular bar on Washington Avenue. If you’ve ever been downtown, you’ve either been there or seen the sign. You can’t miss the huge neon sign of the man with the derby hat and cane. But something that many people may not know is that the 2nd floor, The Leinster Room, transforms into a comedy club almost every Friday and Saturday night.

Since late 2012, one of St. Louis’ own stand-up comedians, Dan Chopin, has been dedicating his spare time to managing The Dubliner’s comedy scene. Not only does he perform, he also finds amazing talents from around the country to come out to St. Louis. This weekend, Friday, June 21st and Saturday, June 22nd, you can see Dan perform, along with St. Louisans Kenny Kinds and headliner Mark Sweeney. 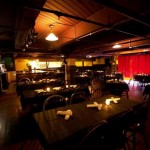 St. Louis born Mizzou grad Dan Chopin has been performing stand-up since the mid-80s. He has performed all over: from the Funny Bone in the small town of Bloomington, IL to a regular spot at the world famous improv comedy club in Hollywood. Dan’s comedy is witty and sarcastic. In addition, he has a talent for performing song parodies. Here’s ‘Stairway to Heaven’:

Also on the bill for this weekend is Kenny Kinds (@steelyken), a comedian and film-maker from St. Louis. 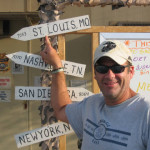 And finally, the headliner, Chicago born but St. Louis raised Mark Sweeney. As for the What High School Did You Go To? He’s a Parkway West High School grad. His first open mic night was at the Funny Bone in St. Louis. He was working as a bartender at Union Station and as a real estate agent when he was encouraged to try his hand at comedy. He killed it the first night and quit his real estate job the next day.

He’s since traveled across the country performing stand-up. He lived in L.A. for six years, taking small roles in a variety of t.v. shows such as Days of Our Lives and Third Rock. (Apparently he has an authoritative look, which works well for security guard-type roles). He’s performed on HBO, Comedy Central, “Night Shift” with Kevin Ferguson, The Bob and Tom Radio Show, The L.A. Connection Comedy Theater and more. Mark has performed multiple times in Afghanistan and Iraq with a group called Comics on Duty. He’s also written a book about his journeys: Court Jester: The Making of a Comedian

He now lives in St. Louis again and performs locally at The Funny Bone in Westport when he’s not travelling. He says his favorite thing to do when in St. Louis is to go to Ram’s games…and roller blade around Creve Coeur Park (I think it’s ok that I added that?). This will be his 2nd time performing at The Dubliner since the comedy showcase began in 2012. He reminds me of Ron White with his casual demeanor and story telling style, but without the country accent and maybe not quite as much swearing.

The show starts at 8:30. Tickets are $10. If you go on Friday night, get there before 6pm to partake in Happy Hour Specials: $4 wells and pints and half price appetizers.

This Weekend in St. Louis Ryan 595 days ago.

This Weekend in St. Louis Ryan 596 days ago.