I’ve been seeing this new fad on Facebook called Vadering. I had no idea what it was so I called the best person I know to answer this question: my brother. When I asked him about vadering, he first laughed at me, but then went into detail about how it was from the first Star Wars, in the scenes where Darth Vader uses his force choke-hold. And it’s now become the newest trend following planking, owling, & Tebowing.

To start, I should mention, it takes three people.

My brother said the key to really sell it is for the person “being choked” to lean back a little and make a face as if they can’t breathe. Of course, with his description I had to ask to see an example:

After seeing how awesome this looks, I had to get in on the action. So I convinced my staff at Peachtree Apartments to demonstrate Vadering and they were totally on board. I ended up getting Person #3’s job so I can say with certainty that it is in fact difficult. After wondering how in the world I was going to capture them in the act and then after several tries, we finally got it…kind of. It was a lot of fun doing this and Ashley and Jeff were great sports.

Here are some of our Vadering pics: 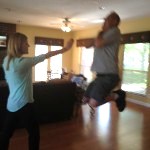 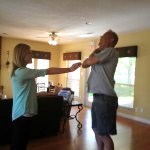 Check out this video of the best of Darth Vader’s Force chokes:

Are you a Vaderer? We’d love to see your pics. Tweet them to us at @reallife_stl or Instagram reallifestl

Ariene is a Texas-raised country girl turned St. Louis city girl that loves to knit, cook, bake, do crafts, anything Martha Stewart like, and addicted to Pinterest. She is also a proud mom that often pretends she has her own cooking show.