The heat has officially arrived in St. Louis. This weekend I was out and about in the sun and all I could think about was being in the water. Of course I love a good pool, but nothing is better than a group of friends in a giant raft floating down one of the many rivers of Missouri. If you haven’t yet experienced a float trip, or are new to St. Louis, here are the top places for float trips in Missouri:

Bass River Resort: This resort in Steelville, the “Missouri Floating Capital,” offers you a variety of camping and floating options. If you’re not quite up for the real camping experience with tents and sleeping bags, they offer cabins for sleeping. They also offer all floating options: kayaks, canoes, tubes and rafts. Float trip options range from 3 hours to 6 hours along the Courtois, Huzzah or Meramec River. Check out their monthly specials which usually include a discount of some kind and holiday specials include BBQ dinner or buffet breakfast.

Huzzah Valley Resort: Huzzah Valley Resort also offers cabins for those not interested in the typical camping style. They also offer RV sites that stay open year round. They have canoes, rafts, tubes and kayaks with 1 day float-trip packages that include lunch. They even offer tandem kayaks. Check out their special packages which include fun events  at the Event Barn, breakfast buffets, BBQ dinners and more.

Ozark Outdoors Riverfront Resort: This resort in Leasburg is probably the most widely known. You have the option to float along the Courtois Creek, Meramec River or Huzzah River. This resort is more of a party resort with large groups partying late into the night and then getting up early on Saturday morning to join the masses in an all-day float trip. They offer rafts that fit up to 10 people, which is great because everyone can be in the same float with their coolers tied to the outside. This resort is where the annual Bull Float Trip happens.

Bear Cat Getaway: This resort in Lesterville also offers both camping sites and cabins. They offer rafts for up to 8 people and canoes to float along the Black River in the Ozarks. Every weekend starting Memorial Weekend, they have live music under the stars. Check out the entertainment schedule. They also offer packages which include dinner plus a general store and food bar if you’re not up for fending for yourself all weekend.

Twin Rivers Landing: If you’re looking for a more relaxed, family-oriented float trip style, Twin Rivers, also in Lesterville, offers floating on the Black River. They have canoes, kayaks, tubes, and rafts for 4, 6, or 8 people. Pets are allowed on the river, but only in canoes. They are more family/quiet time oriented  with but do also have a game barn, sand volleyball court, softball field, playground, and horseshoe courts. 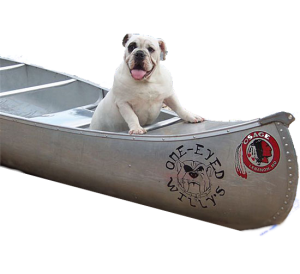 Bird’s Nest Lodge: Another popular resort in Steelville, MO that offers float trips down the Upper Meramec River. They have rafts for up to 12 people, canoes, kayaks, tubes and Johnboats. There are camp sites and cabins with bluff views and hot tubs. They also offer dining facilities for breakfast and dinner so you could just bring your own beer and snacks and be good to go.

One Eyed Willy’s: The place for primitive camping. Located in Lebanon, MO, floating is on the Niangua River. They offer cabins, RV sites and camping. They have canoes, kayaks, tubes and rafts that hold up to 4 people. They are known for their gravel-bar Pete’s Place. They also offer entertainment with live bands on the weekends.

And if you want to join a float trip, but don’t have friends…that want to join you, check out these great trips where you can just bring yourself and join in the fun:

#2. Missouri Float Trips: A Meetup sponsored by FloatMissouri.com, they plan tons of float trips throughout the Summer for anyone to join. The group is free and you just pay for your float trip. They have all kinds of trips from the Dogs Days Float and a Back To School Float to End of Summer trips in September. They’re a little more low-key than The Bull Float trip, but sound like a lot of fun.

If you have never been on a float trip, here are some important tips from someone who has some experience:

1. Bag everything. If you float down the river in a canoe or kayak, you’re more than likely going to tip over at some point. If all of your items are tightly concealed in ziplock bags, nothing gets wet. And bring some bungee cords to tie floats and coolers together so nothing “floats away.”

2. Floating coolers: Obviously a cooler is great because it will keep everything in one place and cold, but it’s not helpful when the boat flips and the cooler sinks. There is an awesome cooler you can get called The Big Bobber

that keeps everything secure and floats so you can easily retrieve it.

3. Water shoes or Tom’s: To get in and out of the float, you have to climb onto rocks, or if you stop along the way at any sand islands, you’ll need them if you don’t want to end up with glass or some other sharp object piercing your foot. And tennis shoes get pretty heavy once they’re wet and sometimes fall off.

4. If you’re making a weekend out of it, then you need camping gear. Plenty of water is a must, food that doesn’t spoil, a tent and sleeping bag, toilet paper, toilet paper, toilet paper (yes, I’m a girl and I know what is necessary), wet wipes, deodorant, bug spray, sunscreen, quarters for the showers, and towels. All of these items are a must. And if you’re not a big fan of tent life, several of the float trip resorts have room for glampers. What’s a glamper, you ask? Check out the glamping life here.

5. Sunglasses and Sunblock: Of course with sunglasses, it’s a good idea to put them on a string or something to tie around your neck so you don’t lose them in the water. And of course, without sunblock, this could be you: 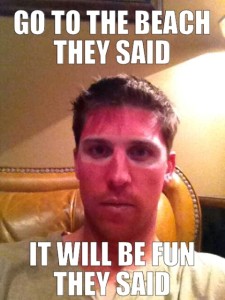 Here are some more tips on what to bring to your float trip.