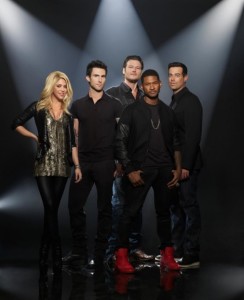 The blind auditions on season 4 of The Voice have ended and the “battle rounds” start tonight. 48 singers made it through the auditions and landed on one of the four teams. In the shows on Monday and Tuesday nights of this week and next, half of the singers will technically be eliminated. The Voice introduced “steals” last season so, a few of the singers eliminated from one team will end up on another in the next two weeks. Each coach gets two steals meaning that after this round each team will have eight singers.

Season 4 of the show has been really enjoyable to watch. Christina Aguilera and Cee Lo are gone, replaced by Shakira and Usher. Ratings for the season premiere beat last season’s and have stayed high. Apparently Christina and Cee Lo just asked for a break this season and plan on returning next season. That’s actually unfortunate because Usher is way less creepy than Cee Lo and Shakira seems like a normal person who isn’t from planet WTF like Christina.

The first two Voice winners, Javier Colon and Jermaine Paul haven’t made a big splash on the music scene. Paul released a single that wasn’t exactly highly regarded. His album, “Finally” has apparently been recorded and will be released sometime this year. Javier Colon, who won the first season, released an album with Universal Republic but it performed poorly. He then parted ways with the label over their lack of support on the album.

Season Three winner Cassadee Pope was just crowned in the Fall of 2012 so it remains to be seen how she will fare. In January, she signed with Country label Republic Nashville/Big Machine. Pope was hugely popular on iTunes during her run on the show. This performance of “Over You” actually knocked “Gangnam Style” out of the top spot one week.

Time will tell how Pope will fare on the charts. Here are my favorites this season going into the battle rounds.

While it pains me as a Mizzou guy to include someone who willingly went to KU, this local girl can sing. She should represent St. Louis well. If she’s out in the battle rounds, maybe she’ll be the female version of Nikko Smith.

Sasha has done backup singing for artists from Christina to John Legend. She’s definitely got pipes.

The South Carolina firefighter got Adam Levine to turn around in the first couple notes of his version of “Colder Weather”. Here he is with band Midnight Blue in South Carolina.

Word is she quit her job to audition. She got the last spot on Team Usher with this performance.

All four coaches turned around for the guy with the sweet hat after this performance.

This was my favorite audition.

Check her out singing “Turning Tables” at a Senior Recital at Visible Music College.

Care to see who some other folks think are the front runner? Click here. Or you could read about the rumor that Usher is a diva on the set.

The battles start tonight and tomorrow at 7pm on NBC. Here’s a preview. Who’s your favorite so far this season?