Stray Rescue of St. Louis and St. Louis University Museum of Art have once again teamed up to provide an amazing event: Urban Wanderers Art Exhibition.  After a record setting 1,600 people attended the opening night in 2012, the theme of this year’s show is eagerly anticipated. The show, “The Plight of the Street Dog,” will focus and educate on the dire hardships of strays on the streets as well as their uplifting recoveries. 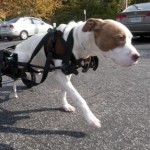 “All those we rescue have important stories to tell, and telling these stories through art has proven to be a captivating way to show the reality of what homeless companion animals face on a daily basis.  The event also draws attention to how shelter animals enrich people’s lives and make the greatest companions. It’s truly one of a kind”, said Randy Grim, founder of Stray Rescue.

It’s so important to share the facts about homeless animals, and this exhibition is the perfect opportunity for Stray Rescue of St. Louis. However, it is also a great event to highlight the tremendous amount of progress the organization has made in recent years to make St. Louis a safer, more compassionate city for both companion animals and people. The exhibition has gained a reputation for being unique and inspirational, and features well-respected artists.

All art displayed in the exhibition will be available through an online auction by visiting www.blacktie-stlouis.com/auctions.  Bidding will begin Friday, March 22nd, and 100% of the funds raised will go directly to helping homeless dogs and cats.

The opening reception on March 22nd is free of charge and will feature regional, national and international level artists who will paint, photograph, and sculpt a Stray Rescue dog or cat that has been abandoned, abused or neglected. In addition, there will be shelter dogs in attendance who will create their own works of art using their paws, tails and noses. The event will also include food and beverages.

This year’s spokes dog is OP, short for Optimus Prime.  He is an amazingly sweet dog that was rescued in September of 2012 after being shot at least 12 times. After he was shot, this gentle dog was tossed in a dumpster and left to die. He had an electrical cord tightly wrapped around his neck. OP received intensive medical treatment at Stray Rescue’s trauma center and Veterinary Specialty Services for weeks; however, due to a bullet lodged near his spine, he lost the use of the lower half of his body. After a miraculous recovery, and aided by a custom built cart, this sweet animal was taken home by Randy Grim and introduced to his new, loving home. OP’s story is a reminder of both the amazing resiliency of our four legged friends, as well as the horrendous violence which people are capable of. It is important stories like these that are told through the Urban Wanderers Art Exhibition, and one of many reasons to attend this event and support these organizations. Every bit of support helps.

Lisa actively supports Stray Rescue of St. Louis and anything related to animal rescue. She would like to travel to Germany one day to research her ancestors that came to America during World War 2.