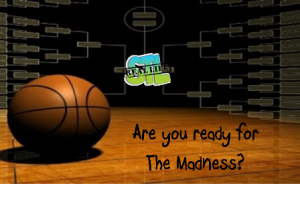 As a devoted Michigan Wolverine fan since a young tyke, I am still haunted by the infamous “time out” that Chris Webber tried to call during the 1993 National Championship game when Michigan was down by 2 points with 11 seconds left to go. But Michigan didn’t have any time-outs left. That mistake led to a technical foul which ultimately sealed the win for North Carolina, 77-71. I was 10 years old, trying in vain to understand the madness.

Now twenty years later, we have a new “Madness” laid out before us. If you haven’t been watching any college basketball, let me fill you in. There is no stand out team. Boom. Top teams have been getting beat by unranked opponents all season long. The defending National Champions, the Kentucky Wildcats, will not be given the chance to defend their title. SLU is representing Missouri with the highest seed St. Louis has earned since 1985. And yes, Indiana and Kansas are number 1 seeds, but both have had their struggles. A 5-year old has a better chance of picking the winning teams than somebody who knows all the stats. This is the year that every team really is vulnerable; which should make it even more fun and interesting. So let’s fill out our brackets, start the smack talk and let the “madness” begin!

Real Life STL is hosting a bracket challenge. What do you need to do? Click the ESPN link below. Register for a free account (or if you already have one, just sign in). Join the Real Life STL group and fill out your bracket. The games begin this Thursday, March 21st. Our bracket will be open to sign up until the 21st at 9am. We figure if anyone has a shot at winning this year, we’d like to witness it. What you get in return: Bragging rights of course! Isn’t that enough? Ok, just for fun, we’ll select two random players to receive a $50 gift card. So have fun everyone…and don’t forget the smack talk!

In case you want some assistance with your bracket, Real Life STL hit the streets of Dogtown on St. Patrick’s Day to test St. Louisans’ March Madness IQ.