I recently had a date night with my boyfriend and he was interested in seeing Zero Dark Thirty. I generally don’t like seeing movies in theaters because much like an airplane, you never know who you’re going to have to sit next to: sometimes it’s a loud group of kids, sometimes it’s a couple who brought in their baby, which I understand sometimes new parents just need to get out…but a movie theater is not the place, sometimes it’s loud popcorn eater, you get the point. Then there’s the whole getting there early so you can pick your seat or else you end up sitting at the bottom of the theater straining your neck for 2 hours. And last there’s the seats, while not uncomfortable, they’re also not my couch with a blanket and cup of hot chocolate. 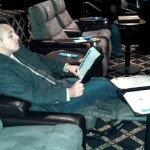 So back to the point, I wasn’t super excited about going to the movies but literally the same day he told me he wanted to go see it, a co-worker came by and told me she had just seen Zero Dark Thirty at the Chesterfield Galaxy Five Star Lounge. I’d seen the ads for it at Ronnie’s, and between the ads and her description, I knew that’s where we were going to see the movie.

It was the best movie experience I’ve had and I highly recommend it. Obviously, it is more expensive because it’s a 5-Star Lounge, but because I don’t see movies in the theater often, I’m perfectly fine paying a little extra to enjoy the movie in a soft leather recliner seat with a milkshake next to me and a Grilled Chicken & Ranch Wrap with fries instead of a bag of gummy bears I bought from the gas station and a 44 oz Dr. Pepper that’s going to make me have to get up halfway through the movie. 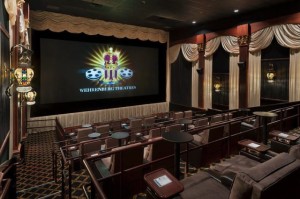 So anyway, here’s all the awesome stuff about the 5 Star Lounge:

It houses the Mega Screen, the largest screen in the area with a state-of-the-art digital projection and explosive surround sound. It is 21+ only, so you don’t have a large group of annoying teenagers or people with babies. The seats are soft leather and you can both recline and heat them. And they aren’t in rows like a normal theater; it’s 2 together (sometimes 3) separated from others so you’re not fighting anyone for the armrest. In addition to the armrest with tray table and cup holder, you also have a small round table to eat your dinner. And when you’re done with dinner and decide you want that popcorn after all (or ice cream, funnel cake, root beer float or the many other dessert menu items), you don’t have to get up, you just press a button and your waitress comes to you. 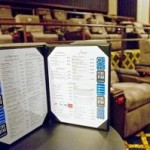 So yeah, it’s pretty awesome. However, there are a couple of drawbacks. It’s not something you can always decide on last minute, like just show up at the movies and choose from a variety of shows and times and seats. There are only 35 seats in the theater, and it’s Reserved Seating so you have to plan in advance to get your seats. The show times aren’t like every 2 hours; they only play a couple of movies in the 5 Star Lounge and there are only a couple of show times to choose from. And lastly, the prices: Mon-Thurs Matinees before 6pm and Fri-Sat before 4pm are $12 and Evening Shows are $16. While higher than the average movie theater, if you’re not someone who goes to the movies every weekend and you like to enjoy your movie experience, then it’s definitely worth it.

There is also a 5-Star Lounge in the Des Peres 14 Cine, which offers the same services plus a 5-Star Lobby Bar. And more recently, the MX District in downtown St. Louis opened MX Movies, which boasts a similar experience. I haven’t been there yet so I can’t compare, but I’ve heard the food menu is heavenly with treats like pork sliders, seared scallops, Serendipity’s ice cream Dipsticks and more. However, I have seen photos of the seats and they don’t look as comfortable or as roomy as the leather recliners at the Chesterfield 5-Star Lounge.

It doesn’t matter which luxury movie experience you choose, the point is that $10 movies with over-buttered popcorn and $5 sodas are out. It’s time to treat yourself to a 5-Star Lounge with a comfortable seat, full dinner menu and cocktail. It’s the only way to enjoy the theater.

This Weekend in St. Louis Ryan 603 days ago.

This Weekend in St. Louis Ryan 604 days ago.