Well, as most of you are aware, the Oscars were on ABC last night. And while the Oscars are about the movies, they’re also about so much more: the jokes, the dresses, the gossip and the performances. So I put together a list of winners for some of these other categories…because it’s never just about the movies.

So the Oscars always start out with the Red Carpet Interviews. This year the red carpet interviewers were Kristen Chenoweth, Robin Roberts, Ryan Seacrest & Kelly Rowland. For the most part, they were average, you know…who are you wearing, who did you bring as your date, etc. However, there were a couple that stuck out for me and I decided they deserve some recognition (good or bad). So, to start:

Best Dressed on the Red Carpet: Twitter gave the win to Jennifer Lawrence, however, in my opinion Jennifer Garner’s beautiful purple Gucci dress with the ruffled back wins it hands down. Gorgeous!

Cutest Red Carpet Interview: When Kristen Chenoweth interviewed Jennifer Garner, she asked her if she was excited about Ben’s nominations and Jennifer started tearing up while talking about him. It was really cute!

Best Red Carpet quote from the night: When Kristen Chenoweth interviews Anne Hathaway, Anne tells her that her mom says her Prada dress is “business in the front, party in the back.” Get it girl!

Best Red Carpet quote (not caught on camera): The usually awkward Jennifer Lawrence made a fuss about something she had to say to Emma Stone, but apparently by the time she got to it, the camera malfunctioned and it didn’t get caught on camera. However, the statement was: Your ass is mine, Stone!”…which sounds like it would have been awesome if we’d witnessed it. 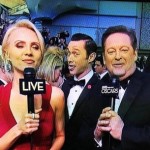 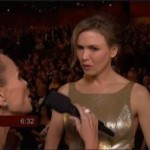 Weirdest interview of the night: Kristen Chenoweth & Renee Zellweger. Renee looks like she’s on drugs and doesn’t seem to understand Kristen’s joke about their colleges football rivalry and just seems confused. It was all very bizarre.

Then the night moved on to the awards ceremony, which was hosted by comedian Seth MacFarlane. And while the performances are a highlight of the show, and there were many great ones from stars such as: Jennifer Hudson, Catherine Zeta Jones performing ‘All That Jazz’, Channing Tatum & Charlize Theron’s dance, the Les Miserables cast performance, Adele and even the finale with Kristen and Seth singing Here’s To The Losers, I am giving the award to Seth’s opening number.

Best song of the night: “We Saw Your Boobs” by host Seth MacFarlane w/ the Gay Men’s Chorus of LA:

Then he moved on to the jokes, which I have to say, I thought most of them were pretty funny. Here are my faves:

Best Seth MacFarlane joke of the night: When discussing the talented Quvenzhane Wallis: “So you got nominated for an Oscar – something a 9 year old could do. She said to me backstage, I really hope I don’t lose to that old lady, Jennifer Lawrence. To give you an idea of just how young she is, it’ll be 16 years before she’s too old for Clooney.” Then he threw a mini-alcohol bottle down to Clooney and said something about getting a buzz.

Best #Oscar Tweet: From @jfj4: Clooney is going to open that, knock it back and then send a gang to kill Seth later. #clooneyisaBAWSE

And then there was the jab at Rihanna and Chris Brown, which while funny, got more of a groan than a laugh from the audience, which is a shame. Best Joke Runner Up: Seth was discussing the violence in Django Unchained and said: “Django Unchained, now that was an intense film. This is the story of a man fighting to get back his woman who has been subjected to unthinkable violence…or as Chris Brown and Rihanna call it, a date movie.” Boom!

Now on to the award presentations. I always love to see who they pair together and what kind of lame jokes or weird shenanigans go down, both with the presenters and the winners. Like Jodie Foster’s crazy speech at the Golden Globes. And they didn’t disappoint this year. Here are my picks for the good and bad presenters.

Cutest presenter pair: Jennifer Aniston and Channing Tatum. I know they’re both in happy relationships, but my goodness they would make beautiful babies.

Oddest presenter pair act: Melissa McCarthy and Paul Rudd. What were they talking about? I tried searching to find out but it seems that no one knows.

Most Boring Presenter Pair: Kristen Stewart and Daniel Radcliffe. I’m sorry to have to put Daniel in this. Maybe if he had a better presenter partner, things would have been different. But seriously, what’s wrong with Kristen? Why does she always seem uninterested?  It’s disappointing.

Best Award Speech: So there weren’t too many crazy speeches last night, however, the (again) awkward Jennifer Lawrence fell on the stairs on the way up to the accept her award for Best Actress and then told everyone she knew they were only standing up because she fell and it’s embarrassing and they just wanted to make her feel better. Check out her fall here.

Best Music to Cut Off Speeches: Jaws theme. Yes, this year they changed the music to cut off long awards speeches to the Jaws theme. I have to say, even though it’s kind of mean, I think it was pretty funny and seemed to actually work…for the most part.

So those are my additional awards for the 2013 Oscars. However, I know many people probably watch the Oscars for the movies as well, in which case, here are the real winners of the night as well:

Actress in a Supporting Role: Anne Hathaway for Les Miserables

Best Picture: Argo. Ben Affleck got to go up on-stage after all.