After many speeches and lots of walking, the Mardi Gras flag was raised in Soulard on Sunday night to signify the start of the 2013 Mardi Gras season.

Mardi Gras Inc., the Soulard company that runs the annual celebration, packs the calendar full of events each year. The events generate millions of dollars in economic dollars for St. Louis and thousands of dollars are donated to area non-profits and endeavors each year.

Here is a brief rundown of this year’s calendar.

A place for the “Rec League All-Stars” to showcase their softball skills in the name of Mardi Gras.  The tournament goes from 7:30am throughout the day in Forest Park to benefit the Police Athletic League. 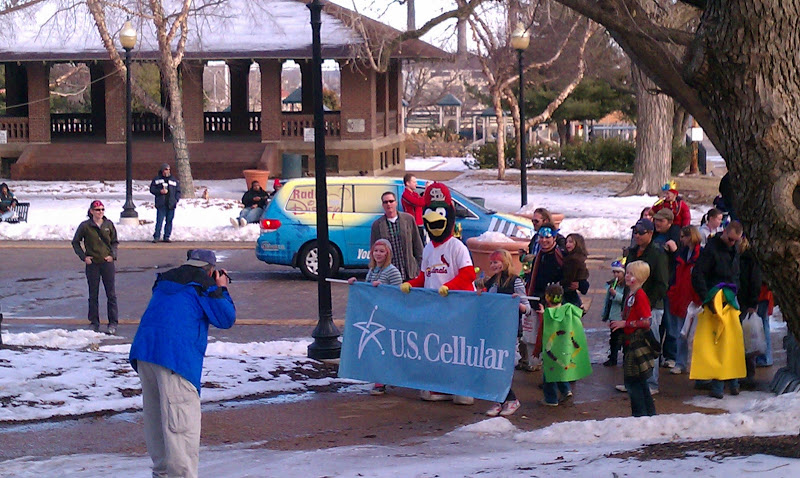 This event is primarily for the kiddos. There will be a Paint Wall for kids to show off their artistic abilities and performances by kid-friendly acts throughout the day on the stage. Children will make their own masks and capes before parading through the streets of Soulard in the Fifth Third Bank children’s parade. Word is Fredbird and Rally Squirrel will again make an appearance. They may be bringing special guests with them as well.

Purchase a tasting booklet to this event to get 12 ‘tastes’ of various wines, whiskeys and beers and four samples of delicious food served by some of the best restaurants and caterers in St. Louis. The event, held at City Hall will feature a local DJ to keep you entertained and word is some whiskeys not available yet on the market will be available.

Ten area chefs will compete in a Cajun/Creole cooking competition while attendees will sample Cajun and Creole dished prepared by a catering company. Attendees will also partake in unlimited samples for Bud Light, Southern Comfort Hurricanes and soft drinks.

A 5K run through the streets of Soulard to benefit the Cardinal Glennon Children’s Center.

Purchase a tasting booklet to sample dishes and drinks from a variety of Soulard establishments. You will want to make a day of this on Saturday before returning to Soulard on Sunday for the Pet Parade.

These events are the most important events of the season for a lot of folks. The Grand Marshals of the event will be The Bacon Brothers, who will perform a special set of hits on a stage on 9th street after the parade.

This event raises thousands of dollars for worthy causes every year. It is held at City Hall as well. Join many St. Louis dignitaries in their finest Mardi Gras attire. El Monstero was recently announced as musical act.

This is the event that most people think of when they think of Mardi Gras in St. Louis. The parade will start at 11am and run from Busch Stadium to the Anheuser-Busch Brewery complex.

This parade will step off at 7pm and will run from the corner of Washington and Broadway west on Washington to 14th street.

You don’t want to miss out on these Mardi Gras events. Make plans now to attend three or four at the very least.