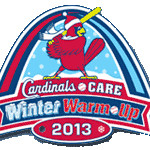 For these 3 days, Cardinals fans will have the luxury of participating in events that won’t happen any other time of the year.

First, guided tours of Busch Stadium between 10am-2pm. Yes, you can get a guided tour other times, but what you can’t get is an included tour of the Cardinals Clubhouse. Winter Warm-Up is the only time of the year that the Clubhouse is available for tours. A portion of the proceeds benefit Cardinals Care. Buy tickets in advance.

The price for individual passes, which are good for all 3 days are: $40 for fans age 16 and over, $10 for children age 5 to 15. Kids under 5 are free. Members of the military, police and fire departments with an active ID will receive one free adult pass which must be obtained in person at the Busch Stadium administrative office. Check out the Cardinals website to buy passes.

You can also get a VIP Winter Warm-Up package from The Hyatt which includes 2 Winter Warm-Up passes, priority line access passes, and a voucher for 2 tickets to a 2013 Cardinals home game. The package rate is $169 for the first night and each additional night is $89. Check out the Hyatt website to purchase VIP passes.