Calling all alcohol lovers! There are some exciting events coming up so get your drinking caps on!

If You’re a Beer Lover: 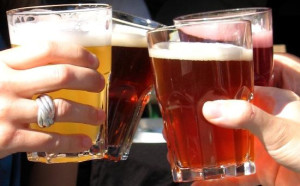 The 2nd Anniversary of Urban Chestnut Brewing Company is Saturday, January 26th. Their traditional anniversary party, Wolpertinger-a celebration of the spirit of craft beer and community, will be from 1-5pm and will feature some special creations. In addition to the beer, the mascot Wolpie the Wolpertinger, will be once again making his grand appearance to help with the release of the namesake UCBC beer. This year, they will re-release their 2012 creation: Winged Nut on Acid, a 9% ABV chestnut ale that has been aging for over a year on Kentucky Bourbon Barrels.

Tickets are $30 and include a commemorative mini-stein, samples from over 20 of St. Louis’ distinguished craft brewers, live music and an opportunity to personalize a shirt/other apparel thanks to Art Farm STL. There will also be prizes awarded to the Best Costumed Wolpertingers.

You can also catch some rare releases from a special guest of the party, Ommegang Brewmaster Phil Leinhart, on Thurs, January 24th at The Bridge or Friday, January 25th at I-Tap in Soulard.

Or if you’re a wine connoisseur:

The 11th Annual St. Louis Food and Wine Experience at the Chase Park Plaza Hotel is happening  for a whole weekend! Starting Friday, January 25th at 7pm, it kicks off with the Premier Tasting in the Starlight and Zodiac Ballrooms. Admission is either $195 (Premier Tasting Only) or $250 (Premier Tasting plus 1-day VIP Admission) and includes food, unique wines and special Riedel wine glass…VIP-style. *Cocktail attire

The Food and Wine Experience extends into Saturday and Sunday from noon to 5pm in the Khorrassan Ballroom. These tickets are only $50 in advance or $60 at the door and include tastings from a selection of over 700 wines, a huge variety of food and your very own souvenir wine glass and valet wine plate.

Or you can Experience it VIP Style in the Lindell Ballroom. VIP Reserve Room tickets are $95 in advance/$100 at the door and include wine tastings from a more exclusive variety of wines, some with limited availability to the region plus a Riedel wine glass and gourmet hors d’oeuvres designed by Schnucks.

The 5th Annual St. Louis Centennial Beer Festival at Moulin Events & Meetings on Chouteau Ave is February 22nd-23rd. It kicks off with the Brewmaster’s Dinner ft Six Row Brewery on Fri, Feb 23rd from 6-9pm. Then on Sat, Feb 23rd from 2-5pm or 6-9pm, take advantage of different beers from 86 different brewing companies such as Schlafly, Six Row, Sam Adams, Cathedral Square, Square One and so many more. It’s probably a good idea to purchase your tickets as soon as possible because it seems like a pretty popular event. Both the Brewmaster Dinner and VIP Tasting sold out quickly last year.

This Weekend in St. Louis Ryan 742 days ago.

This Weekend in St. Louis Ryan 743 days ago.