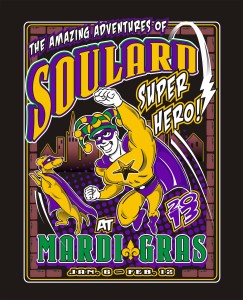 The Mardi Gras season in St. Louis is made up of a series of events spread out over the course of 1-2 months, according to the year. This is of course contrary to the belief of 85% of the population which thinks that Mardi Gras in St. Louis is just the Grand Parade Day in Soulard. This year, the River City Casino Grand Parade is on February 9, going from Busch Stadium to the Anheuser-Busch brewery. This weekend, however, the Mardi Gras team is taking over the Rotunda at City Hall for two events.

On Friday night, the Wine, Beer & Whiskey Taste will be held in the Rotunda. The event will feature a huge selection of wines, beers and whiskeys from the likes of AbInbev, Jack Daniel’s, Southern Comfort, Woodford Reserve and Korbel, to name a few.

The event goes from 6:30p-10p. Already going to the event? Tell all your friends about it by RSVPing on the Facebook event page.

Tickets for this event will increase to $40 at the door.

On Saturday, the Crystal Cajun Cook-Off will take over City Hall from Noon-4pm. There, 10 professional chefs and 10 amateur chefs will compete for prizes in a cajun/creole cooking competition. While attendees won’t be able to sample the creations of those chefs due to pesky health code restrictions, they will be able to partake in food of the same nature from a local catering company. The $35 ticket again gives you four food samples. The ticket also includes unlimited samples of Bud Light, Southern Comfort Hurricanes and soft drinks. Those that purchase tickets will also receive recipes from each of the chefs in the competition and a bottle of Crystal Hot Sauce.

You can also RSVP to this event to show your Facebook friends how hip you are.

Tickets for both events are available by clicking here.

You could also save money by buying tickets to multiple 2013 Mardi Gras events with a flex package.