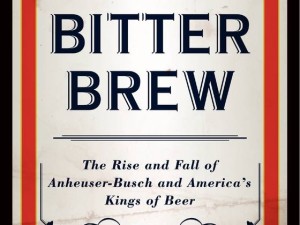 On April 7, 1933, an estimated 35,000 people crowded the streets in South St. Louis outside the gates of the Anheuser-Busch brewery. At the stroke of midnight, the gates opened and trucks loaded with bottled beer rolled through the streets of St. Louis for the first time in 13 years.

The new book Bitter Brew: The Rise and Fall of Anheuser Busch and America’s King of Beers

fittingly doesn’t open with the above story, the prologue instead describes a moment near the end of the fall. The book is not a Walt Disney movie, it doesn’t have a “storybook’ ending.

William Knoedelseder is the gentleman who got me to buy this book. He came through town in November to promote his new book. A good crowd of people saw him give a talk sponsored by Left Bank Books in the basement below Bridge. Many of the seats were filled by members of the author’s extended family and a few members of the Busch family were even rumored to be in attendance.

As a kid, I had a Spuds Mackenzie poster on my wall. I went on field trips to Grant’s Farm. I never knew some of the tragic things behind the Busch dynasty. I also never knew some of the more impressive things. I’m not a professional book reviewer or anything so, here are of the more impressive things I learned in reading the book. I highly suggest picking up your own copy.

Throughout the book, references are made to commercials and other marketing aspects in the company’s history. Here are some of the best commercials: