What is that you ask?

It’s a party with a little bit of everything…oh and did I mention it’s free?

If you’re looking for a cheap, low key but fun event Saturday night or if you’re an amateur comedian or musician, then this is a great event for you.

The Music Showcase 2012 is happening this Saturday at the Arden Mead Center in Webster Groves. From 6pm until 1am, there will be music, comedy, dancing, art, food and drinks…maybe it should just be called Variety Show 2012? It’s free entry but donations are accepted. Here’s the schedule: 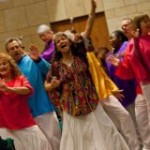 7:20-7:55: The Gateway to Agape Choir led by Pooki Lee and Bob Baker perform. With a name like that you can already guess they’ll be interesting. Maybe you’d know them better as the Free Hugs committee at local St. Louis events like Earth Day in Forest Park. They describe themselves as a trans-denominational, transformational, multi-cultural choir open to people of all ages who are intent on spreading love, compassion and healing through music, song and dance.

8:00-8:50pm: Comedy Time! Jim Coughlin, St. Louis raised comedian, actor and writer who appeared in the rumble scene in Anchorman will be showing off a little stand up comedy followed by a Comedy Improv set from 8:15-8:50pm.

11pm-1am: Open Jam: Random drawings to create random bands, then each band will get to perform for 20 minutes (bring your own instruments).

In addition to all of the above:

Check out the Facebook event for more info, to join the group, see who’s going, etc and enjoy a little relaxing fun this weekend so you can party hard on New Year’s Eve.