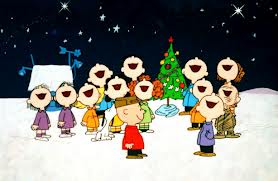 I know everyone only remembers Hanson from MMMBop, but listen up! I’ve had the Pandora Christmas station on for about 3 weeks now and one day I was just listening and I was like “Wow, I love this song. Who sings this?” So I looked and BAM, there it was…Hanson. I was surprised myself but then I listened to more of their album, and it really is excellent! And it got me thinking, what other great Christmas songs don’t I know about?  So I polled my office and came up with a list based on my own favorites as well as some of the favorites I received from others that I am now also a fan of.

So without further ado, here are the Top 5 Christmas Songs and Albums. If you haven’t heard some of these before, I strongly urge you to listen before judging. (Oh, and these are in no particular order, except I’m not gonna lie, if I had to listen to only one of these albums for the rest of this Christmas, it would be Hanson).

Kenny Rogers & Dolly Parton: Once Upon a Christmas

Best song from the album: “Christmas Without You”

Celine Dion: These Are Special Times

Best song from the album: “Don’t Save It All For Christmas Day”

Best song from the album: “That’s What I Want For Christmas”

Best song from the album: “All I Want For Christmas Is You”

“All I Want For Christmas Is You” by Mariah Carey. Of course Mariah does it best, but I also love the performance done by Joanna in Love Actually

“Santa Baby” originally by Eartha Kitt, but it’s also been covered by like every singer in the world including: Madonna, Taylor Swift, Kylie Minogue, even a male version by Michael Buble, which is kind of cool. I actually really like the versions by LeAnn Rimes and Santana from Glee, but ultimately Eartha Kitt’s original is best.

“You’re A Mean One, Mr Grinch” by Thurl Ravenscroft

Do you have a video of your favorite Christmas song? Let’s see it!

Brought to you by Mills Properties
You can purchase any of these Christmas albums and songs by clicking the affiliate links.