It will be held 2 blocks East of Soulard Market Park in Kosciusko. There will be two entrances to the event; one on 3rd and one at Lafayette and 3rd. The whole fenced area will be centered between Geyer and Marion.

General admission to the event is $10. Those under 12 are free and anyone dressed in German attire will be admitted free.

VIP tickets are still available.  These tickets include 7 drinks (of anything you want) and food including dinner, brats, and a large German pretzel. They also include VIP parking and special bathroom facilities. If you plan on making a day or a weekend out of the event, the VIP tickets are a good bet. Here’s this year’s Soulard Oktoberfest television commercial.

If you don’t go the VIP route, be sure to look for a beer/wine tent run by a non-profit to buy from. Both the Soulard Restoration Group and the Soulard Business Association will be running tents all weekend. These organizations receive a portion of the proceeds from the beer sales from their tents and use those funds in the Soulard neighborhood.

There will be four contests throughout the weekend, which you can enter via the Oktoberfest website. Contestants will compete in bratwurst eating and beer stein holding as well as competing for the title of Strongest Barmaid and Ultimate Barcycle Team.

12 bands will grace the 3 stages over the course of the weekend. Here’s the schedule.

Plenty of general parking is available around the event or in the Soulard neighborhood just across Broadway.

Be on the lookout for any marriage proposals this year. 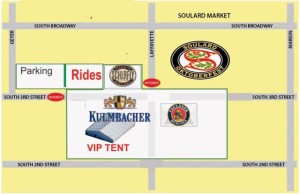